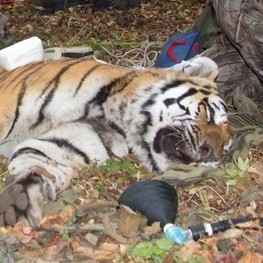 Leopards were heard close to camp and traces found on aptly-named Leopard Ridge, but none captured. Two large black Asiatic bear were also been captured and data logged. An extremely rare Amur tiger captured in a remote area of Russia by an international research team searching for the even rarer Amur leopard has boosted the chances of saving both species from extinction.

Capture and examination of the huge male tiger was a major success, said big cat specialist vet Dr John Lewis, WVI co-founder and director and on the team in far eastern Russia in autumn 2011. He explained: “We need to catch, assess and radio collar tigers as well as leopards if we are to discover how they co-exist. “Tigers are present in the proposed leopard reintroduction area and we must know the risks for any leopards released there. Infectious diseases affecting tigers can equally affect leopards so health screening has major conservation relevance for both animals.” (See Our Project) His work on the Amur leopard – the world’s most endangered big cat with as few as 25 left in the wild – positions WVI as the key veterinary support in the programme to save it from extinction in the wild. Text messages, from an area notorious for poor communications, illustrate the tiger capture build-up: “Fresh tiger prints 1km from camp this morning! Think we are getting closer”, followed by a triumphant; “Caught large male tiger!” The tiger, one of just 450 remaining, was anesthetised for examination and released with a GPS tracking collar. It is the only traceable individual in the area, he believes, after signals from previously collared tigers have been lost. Leopards were heard close to camp and traces found on aptly-named Leopard Ridge, but none captured. Two large black Asiatic bear were also been captured and data logged. The team, including young Russian field vet Dr. Mr Mikhail Gonchuruk, spent two months tracking the elusive, solitary and nocturnal Amur leopard before temperatures plummeted below -20 degrees centigrade, inhibiting their sensitive immobilising leg snares.

A very general gesture which will help raise funds to continue John's legacy.