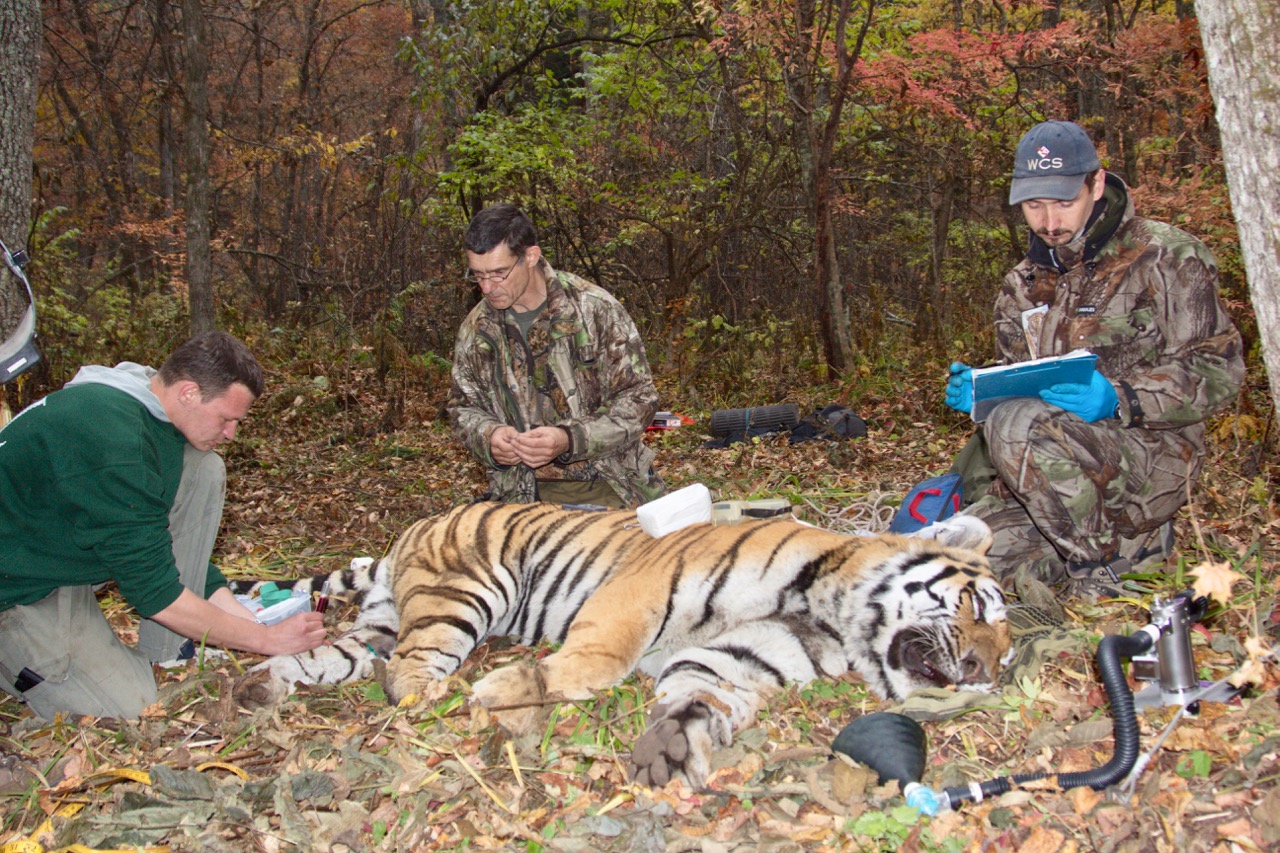 World-renowned big cat specialist and WVI co-founder, John Lewis, has been supporting the conservation of Amur tigers and leopards in the Russian Far East for many years. A very significant part of that work has been training and advising Russian vet Mikhail Gonchuruk.

Misha is the vet for the Primorsky Tiger and Leopard Rehabilitation Centre, which is about 70 kilometres from the city of Vladivostok, near the village of Alekseyevka. He has been telling us how much the cooperation with John has meant to him and how it has impacted his professional development, as well as how John has helped transform wildlife medicine in the Russian Far East more generally. Along the way the two of them have become the best of friends.

My name is Mikhail, and for twelve years I have been working in wildlife veterinary medicine in the Russian Far East, in an Amur leopard and tiger wildlife health project supported by the Zoological Society of London (ZSL). Do I like my job, I hear you ask. The answer is yes! I love my work so much that I simply cannot see myself anywhere else other than here, and this is largely due to the people who led me into this profession and who surround me now. One of them was, and is, John Lewis.

My acquaintance with John began well before I understood what wild animal veterinary medicine is, and more to the point, long before I became directly involved in it myself. It all started in 2007, when WVI, ZSLand Moscow Zoo took the initiative to hold a workshop on big cat anaesthesia for both specialists and students of the Primorsky State Agricultural Academy. The workshop took place in the context of the preparation of local wildlife vets and other experts for the potential reintroduction of the Amur leopard –something which is still in progress of course. It’s easy to guess that JohnLewis was a key tutor for this training! It was there that I found out how zoo and wildlife veterinary medicine differs from domestic pet work, and just how complicated and interesting it can be. I realised all this thanks largely to John and his ability to explain things clearly and consistently, his obvious charisma and, most importantly, his undisputed authority on the subject.

John then spent a lot of time in the Russian Far East overseeing the veterinary side of leopard and tiger trapping by the Wildlife ConservationSociety (WCS), which was carried out in order to better understand the animals’ ecology. By then I was already employed as a vet by ZSL and continued to learn from John in the field. In those days – around 2007-2012 – wildlife medicine was not well established in Primorsky Krai, so John’s presence and involvement played a fundamental role in the development of wildlife veterinary work in our region – and it wouldn’t be an exaggeration to say the whole of the Russian FarEast.

It would take me hours, maybe even days, to list all the ways John has influenced how wildlife medicine has developed here – the main point is really just how he has shaped the thinking of our specialists. But he is always anxious to stress that learning is very much a two way process.

And it’s never all work – our parties in the field when the trapping was finished and the snares removed were always great fun – though perhaps not so much the morning after!

One of the most interesting lessons I learnt from John didn’t in fact involve big cats, but is all part of my professional development and having the confidence to take considered decisions. It was about walruses,and indeed all pinnepeds, which I found out from him can be extremely difficult to anaesthetise safely. I helped John successfully anaesthetise a walrus in2013, but in 2016 I assisted him again at Vladivostok Aquarium and this was less successful as the walrus in question turned out to be suffering from chronic pneumonia and heart failure and sadly did not survive the operation, through no fault of the vets present. The underlying problem was only revealed by a post mortem. Understanding just how difficult it can be to anaesthetise these animals, and how important it is not to underestimate the potential complications, helped me recently make a decision not to operate on a young injured seal. Although I am of course not a marine mammal specialist, a local seal rehabilitation centre asked me to help as there was no-one else available. They knew that there was risk attached to anaesthetising a seal, and made it clear they would not blame me if the animal did not survive. But I was able to make a judgement, based on the knowledge and experience I gained from John, that it was not worth the risk in this case, and advised that the seal simply be kept on a course of antibiotics instead. I am delighted to say that a few weeks later the injury to its lower jaw has healed well, without the need for any surgical intervention.

Today I count myself as an experienced wildlife vet and younger specialists come to learn from me. But at the same time I never stop learning from John – when he comes to Russia, or when he helps with work remotely.

There is no doubt that John has played a critical role in establishing professional and evidence-based wildlife veterinary medicine in the Russian Far East, and that it is in large part thanks to him that it continues to develop to this day.