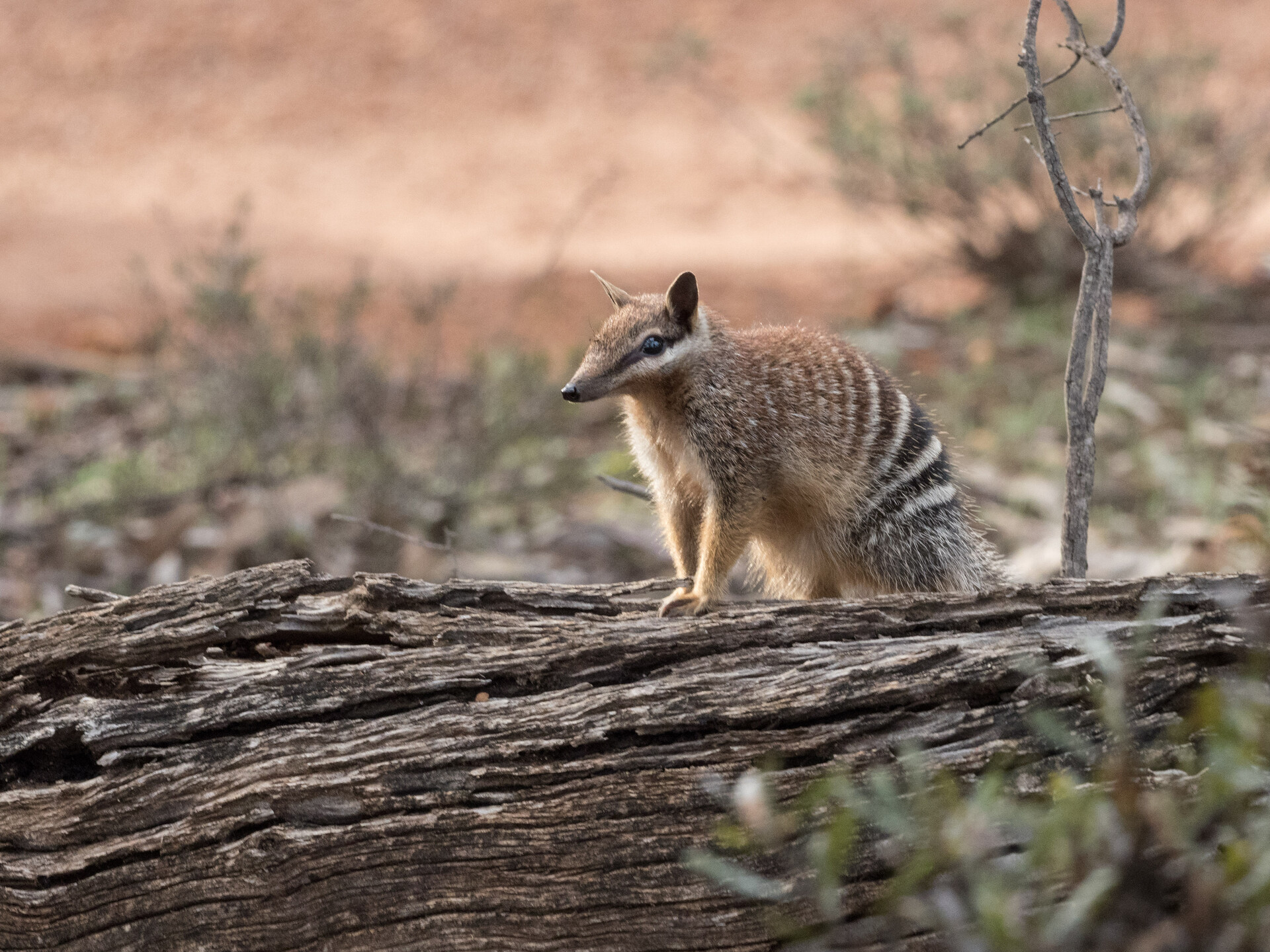 The Discretionary Award was chosen by the organisers, rather than the judges, and is given to the photo, or in this case photo's, that both touched our hearts and taught us something new.

This fantastic series of photos from Lyn Alcock was my first introduction to numbats (also known as noombats, walpurtis or banded anteaters). These amazingly cute marsupials were once widespread across Southern Australia but are now restricted to a few small colonies in Western Australia. This staggering range map shows just how much they have declined over the last century.

Historical range map of the numbat (Myrmecobius fasciatus). Based on: Fumagalli et al 1999

The decline started after red foxes were intentionally introduced to Australia in the 19th century by Europeans. Numbats were ill-equipped to deal with these new predators and were quickly wiped out from many areas. Now only two natural populations remain, one in Perup Nature Reserve, near Manjimup and the other at Dryandra Woodlands, near Narrogin, where Lyn took her photos. It’s thought the Numbats were able to persist in these regions due to the abundance of hollow logs which give them somewhere to hide.

Numbat Juvenile emerging from a hollow log in Dryandra Woodlands, Western Australia. October 2020. Credit; Lyn Alcock. "Numbats run to hide in hollow Wandoo trees (Eucalypts) when they feel threatened or uneasy. Cats and foxes are the main predators and cannot access the hollow logs. These logs also contain the termites which are the only food for Numbats. Their survival depends on successful control of cats and foxes, the main predators" Lyn puts as the caption to this photo.

‍Threats from predators are made worse by habitat loss and fragmentation as land is cleared for industry or housing. This not only means the numbats are more exposed, but also threatens their food source. Numbats have a very narrow diet, feeding exclusively on termites. An adult numbat can eat as many as 20,000 termites a day. Unlike many termite-eaters they lack the strength to break into the termites’ clay mounds and instead must sniff out the termites when they are easy to reach, either just below the surface of the soil or munching on rotting logs. Their pointed nose is ideal for getting into small holes and their tongue is sticky and can be up to 11 cm long (given that a numbat, including it’s tail, is only 35 - 45 cm – that’s pretty impressive!).

Numbat baby learning to browse for it's own termites. Dryandra Woodlands in Western Australia. Credit; Lyn Alcock. "Once the babies have been deposited in a burrow, Mum suckles the young for 2-3 months until they gradually emerge and begin to browse for termites themselves. They are very easy for predators to attack at this stage. Numbats only survive naturally in 2 areas in Western Australia and a recent uncontrolled prescribed burn is thought to have killed up to 40 of them."

But that’s not all that’s impressive about numbats. They also have one of the shortest gestation periods of any mammals, at only 15 days. And, unlike most marsupials, they don’t have a pouch. Instead, newborn numbats must find their way to a teat, latch on and cling on to their mother for dear life. Once latched on they will stay in position for up to 7 months, at which point they will be too big to carry and will be left at home in the nest. But their mother will continue to suckle them. They won’t venture out of the nest or start foraging for termites themselves until they are 8 or 9 months old.

A mother numbat with babies attached. They do not have a pouch. Dryandra Woodlands, Western Australia. August 2021. Credit; Lyn Alcock. "Numbats do not have a pouch and the babies are each attached to a teat for several months until they are deposited in a burrow, where Mum suckles them for 2-3 months till they emerge other own. These babies are about to be detached any day now. Their survival is imperative for the survival of the species"

A captive breeding program has been in place at Perth Zoo since the 1980s and so far over 270 individuals have been released into fenced areas and protected habitats. These protected populations seem to be increasing but elsewhere the population is still in decline, with less than 800 individuals thought to remain in the wild.

We got in touch with Lyn to find out more about her connection to numbats and how she got these amazing shots. She said “Numbats are a threatened marsupial who now exist in only two natural populations in Western Australia, one of which is only 30 km from where I live in Narrogin. Everyone who sees them is totally fascinated at how small, cute and amazing they are. But they are not easy to see as they like to hide in hollow logs and it takes much luck and experience to be able to see and photograph them. I am totally absorbed in doing just this and spend most days of the week driving slowly for hours to see and take my photos of them.”

Congratulations Lyn! Thank you for sending us in these wonderful photos and for introducing us to numbats, we are all in love!