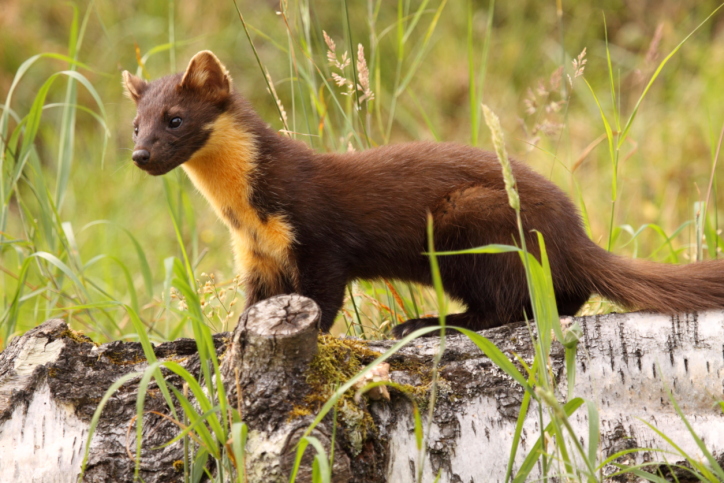 ‘Fancy coming to Scotland?’ he said and I instantly thought of long walks by a loch and cosy evenings warmed by an open fire in a local hostelry – But wait, this is John Lewis asking the question and I know him well enough to understand that a trip to anywhere is likely to involve a wildlife project of some kind. ‘Yep, definitely’, I replied (not being put off at all by the mention of sleeping bag liners and very early wake-up calls)…

I admit, I like my ‘creature comforts’ but the truth is  I also really like finding out a bit more about the work John is involved in and there’s no better way to do this than to accompany him when our schedules permit. So, one weekend, early in September, we flew to Inverness to see the lovely team working on The Vincent Wildlife Trust’s pine marten conservation project.

In its third year now the team have, with WVI’s support, trapped and vet-checked a total of 51 pine martens from different areas of the pine forests around Inverness for re-location to Wales.

On arrival at the project team’s house mid-afternoon, our first job was to jump in the landrover with Jenny and Lizzy (two of the biologists) to ensure the traps were dry, well-camouflaged and had fresh food to attract the pine martens. A bumpy drive down muddy tracks led us into the forest where the team had already marked the locations of each trap, usually about 200 metres apart. A short walk deeper into the forest and John and I were tasked with finding enough moss to cover and add more insulation to the trap, whilst Jenny and Lizzy replenished the food supply. The traps – looking like tiny hobbit houses – were then set and once all 17 were checked and prepared, we headed back to the house for dinner and an early night.

Up before dawn the next morning, we retraced our steps in the forest, checking each trap for a pine marten. This time there were two, a male and a female, who were carefully and quietly transported back to the house and left alone to settle in for a couple of hours, before the vets stepped in.

WVI’s vet, Alex Tomlinson, works with the project team for the entire five-week trapping season. John has been involved since the project started and this was the second time he has visited this year and Alice Bacon, a local vet also assists.

An old, two-berth caravan in the driveway of the house has been re-modelled into a well-equipped vet hospital, complete with very effective cardboards window treatments (apparently ‘supplied by WVI’ – reassuring to know no funds are wasted…). Every effort is taken by the whole team to ensure any stress to the animals is kept to a minimum throughout the captive phase of their re-location and in particular during the assessment process with the vets.

In order to assess the health of each pine marten and to gain essential data for ongoing monitoring of the project, the vet performs a number of procedures whilst the pine marten is under anaesthetic. Alex carried out the whole process quickly and efficiently: checking the animal’s joints, teeth and claws, recording its length, weight and sex and taking blood and fur samples along with photographs of the unique patterns on the cream-coloured bib on the pine marten’s chest. Finally, the fur was combed through and any ticks or foreign bodies were collected for analysis.

With minimal noise and unnecessary activity, the pine martens were then removed to a quiet area where their recovery from the anaesthetic was closely monitored. Once all was established to be well, they were taken off to start a new life - and, hopefully, new lives – in an area of forest in Wales where, thanks to the work of The Vincent Wildlife Trust and WVI, a population of pine martens is starting to return.

Early the following morning we returned home. I feel very privileged to have been able to see, at first hand, a project that had been developed and is delivered by knowledgeable and experienced professionals who unerringly maintain the well-being of the animals at the centre of their work.