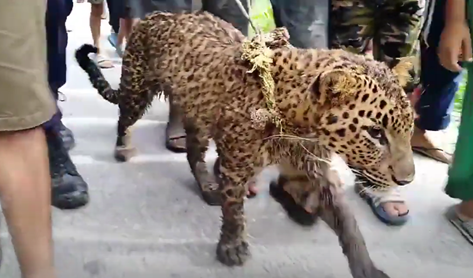 A mystery neurological disease in a wild leopard from Nepal highlights the need for further investigations into wild leopard health.

This remarkable image, taken last year in Parbat, Nepal, shows a wild leopard being led through the streets, surrounded by crowds of clamouring people. The leopard in question was captured by local police after showing up near the village and exhibiting strange behaviour. He appeared very subdued, so much so that some people were posing for selfies with him. Questions were also raised over his vision, as he seemed to be walking into things, as if he were blind. Thankfully, the animal was transferred to Nepal’s National Trust for Nature Conservation Biodiversity and Conservation Centre, where the veterinary team were able to provide symptomatic and supportive care. Miraculously after five weeks he had made a full recovery and was well enough to be released back into the wild. You can watch a video of the release here.

He certainly looks like he’s feeling better! This is another example of the great work NTNC are doing and with their hospital now fully operational, and your generous support during lockdown, they hope to be able to help even more animals.

The cause of the symptoms seen in this leopard remains unknown. Regular followers may recall that similar symptoms have been seen in wild tigers from Russia that had been infected with Canine Distemper Virus. However, all of those cases proved fatal. Given this animal’s dramatic recovery CDV seems unlikely. So…  What could have caused these signs? And could other animals be affected? For now, the answer remains a mystery. But a new initiative starting later this year could change that. WVI is supporting a ground-breaking new project which will conduct detailed health assessments of all leopards captured in response to conflict in Nepal. These investigations will give us a better understanding of the conditions affecting wild leopard health and may even identify steps that could be taken to improve it.