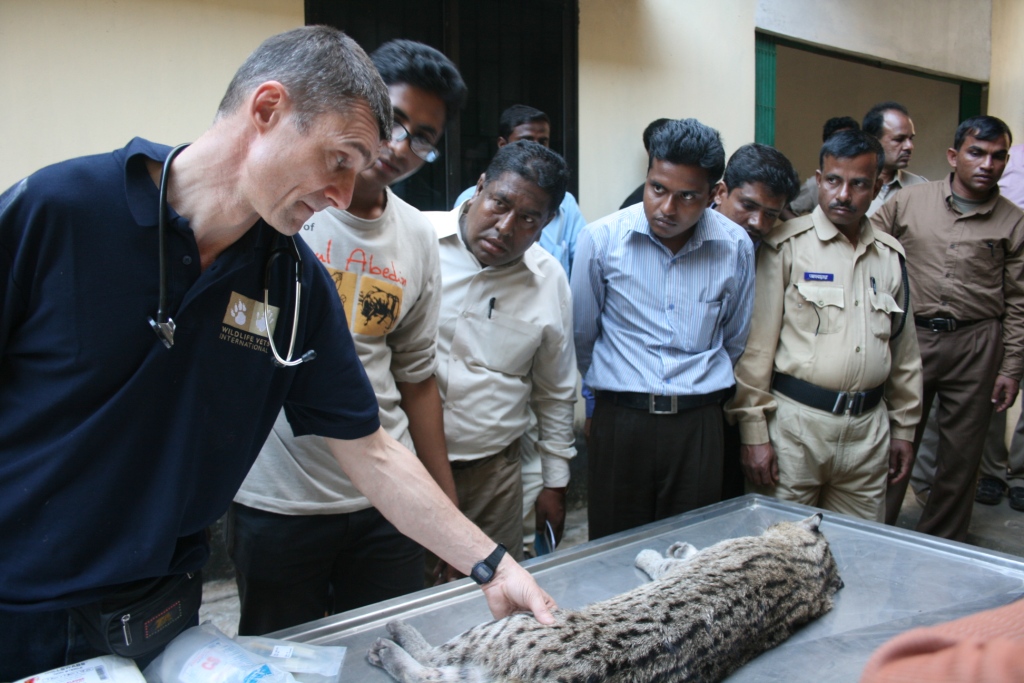 WVI Executive Director, OliviaWalter, spoke last Sunday at the Big Cat Sanctuary in Kent about how our inspirational co-founder, the late Dr John Lewis, exerted an influence throughout her career, right up until his untimely death in 2020:

“I have been asked to speak in my role as Executive Director of Wildlife Vets International, the first charity that John helped set up.

I met John soon after I graduated and in fact worked with him my entire career in one way or another. My story is not dissimilar to the many others he inspired.

In 1997 I was volunteering for SarahChristie at ZSL, on my days off working as a keeper. Sarah’s office was at the very end of a corridor with windows and high desks along one side, one for each curator. Sarah’s den was surrounded by books and files. She had a ‘normal’ height desk so you couldn’t actually see her until you got close. What you could see was the cigarette smoke, and you could certainly hear the furious typing and equally furious swearing.

It was in this fug that I metJohn, along with Doug Richardson, as the three of them discussed how they would save Amur tigers and leopards. Their conversation was intoxicating and I was entranced, desperate to be involved in saving the tigers. I became a hard core groupie, soaking up their knowledge and experience, silently begging to be invited on one of John’s trips to Russia, Sumatra, Cambodia, Malaysia, Bhutan,India or Nepal.

I found out pretty early on that I was a useless field biologist and so have spent much of my career on that bridge between in and ex situ conservation. This is an area where John excelled, taking the knowledge gained from his work with captive animals and applying it t o their conspecifics in the wild and vice versa. Like many here, at big cat meetings I would hang on every word as he described his latest trip to the Russian Far East – enticing us intellectually with the factual need and scientific integrity of the trip whilst also satisfying our sense of adventure and the romance of far flung destinations, with his descriptions of people, places and goings on. We barely noticed how much we were learning and were always left with a hunger for more.

My story is typical of the immense legacy that John has left. There are many many people who were inspired by him in a similar way, in this audience and around the world. And in turn, John was always keen to point out that he learnt just as much from those he metas he was able to impart to them. The people John inspired were not limited to animal professionals: for months after his death, I had messages of condolence from, and conversations with, fans of Monkey World’s tv series who had watched John for years; artist Penny Wheatly was so inspired by John’s work with Amur leopards and tigers, and by John himself, that when she heard he had died she poured her grief into the most beautiful watercolour – John’s Tiger, which you can see in the marquee and order limited edition prints from us today; John Humphries, notTHE John Humphries, discussed tigers and motorbikes with John over lunch one day and instantly became a fan. While none of us can replace John, Jess and I have managed to form a great partnership, even friendship, with John and his wife Cathy, and they continue to support the projects that John Lewis initially inspired them with.

The transfer of invaluable knowledge, something that was very close to John’s heart, is at the core of what Wildlife Vets International does today, and the trustees and our team are passionate about ensuring that WVI continues to help vets and biologists saving endangered species through training and exchange of expertise. We miss John hugely; his immense knowledge, his strategic mind and his enchanting stories. He still had a lot to bring to WVI, conservation medicine and the conservation of Asian cats. Fortunately, while alive he invested his time and support in some incredibly talented people and as I continue to work with them, it makes me smile to see John coming through in all of them.

I could finish this with a corporate strap line about WVI being an important piece of the conservation puzzle but he would hate all that marketing jargon, so instead I want to say that John would be so incredibly proud of how protégés and colleagues like Martin in the US, Nic, Jess and Jane in the UK and Misha in Russia, amongst others, have rallied to support and build WVI so we can continue the work that he started and felt so passionate about.