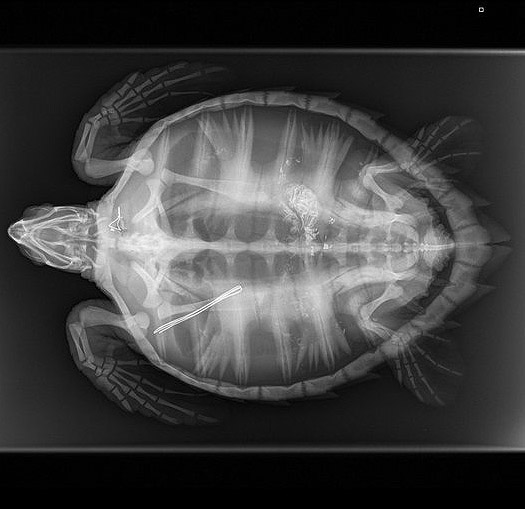 This is the story of Eden, an injured Hawksbill turtle. It is similar to many rescued by MCSS. WVI has provided equipment and continues to provide specialist advice remotely.

We have set up a campaign to be able to continue to support MCSS; training rehabilitation staff and Seychellois vets. Donate at Save Eden

Eden is a Hawksbill turtle (like the one in the main picture) that was brought in to MCSS Rescue and Rehabilitation Centre, Banyan Tree Resort, Seychelles on 31st March 2016. A concerned local spotted the injured animal off Eden Island and called the local environmental help line who in turn called MCSS. Eden, named after the area where she was found, was in a bad way with a cracked shell.

Eden's cracked shell was fixed with wire mesh and putty[/caption]

MCSS staff and local vets patched up the crack and after four days of antibiotics there was no evidence of infection. The carapace (top side of the shell) was then sealed with a layer of stainless steel wire mesh embedded in epoxy resin. Eden was put in a reclaimed Jacuzzi for recovery (he wasn’t allowed the bubbles on!!). Job done, or so they thought With the weekend approaching (typically), Eden’s weight started to drop, her eyes became dull, and she still wasn’t eating. She became less active and staff noticed that when she did move, she was obviously having buoyancy problems. MCSS tweeted Eden's x-ray to see if anyone had any suggestions. What started as a fun 'Guess the foreign object in the x-ray' became a serious question as Eden lost weight and the will to live. Eden's life was on the brink for many days and recovery took longer due to the lack of expertise and right equipment and medication.

What WVI vets do best

It is difficult to treat an animal you haven’t seen and without the availability of medication that you know works. Luckily working in these situations is what WVI vets do best. WVI turtle expert Tania Monreal was available between other clinical work to have reasonable communication with David and Imogen at MCSS across various media platforms, despite time differences. Repeat x-rays, weigh-ins and excellent descriptions from Imogen enabled Tania to give tailored treatment advice (including How To videos) as she eliminated possibilities and found out what medication, equipment and expertise was available to MCSS Staff – there wasn’t enough time (or funds) to send a WVI vet out.

Turtles are notoriously difficult to treat. Diagnosis and surgery is more complicated due to the presence of a shell so to have a digital x-ray on hand is priceless. THANK YOU PLH MEDICAL for sorting one out. T

he committed MCSS team got the blockage moving and they saved Eden’s life. X-rays were not conclusive but something along the lines of a plastic bag/fishing line including hook was suspected. Until she passes it, we won’t know for sure what the blockage was. Turtles often consume plastic bags, mistaking them for jellyfish or similar food. Plastics and other materials get stuck in their intestinal tract stopping them from swallowing or digesting food properly. Plastic trapped in the stomach can start decomposing and releasing gasses which make the turtles float. This puts them at risk of starvation as they cannot dive to feed and increases the chances they are attacked by predators.

MCSS staff managed to get Eden to retain weight has generally increased and become more active. Eden needed to be tube feed for several months as she was not interested in eating herself. Left: MCSS volunteer takes Eden to be tube fed. SUCCESS In early July, Eden ate for herself for the first time in months. The video (right) shows Eden swimming in her Jacuzzi eating tuna. The object in the gut was monitored by x-ray and despite a few temporary set backs, Eden is doing well and the blockage is moving. Finally in early July Eden started eating on her own - See video footage - her buoyancy is more regulated and she is much happier. What now? The Rehabilitation Centre now has another Hawskbill turtle as well as a number of endangered yellow and red bellied mud turtles. Follow Eden’s progress on Twitter @WildlifeVetsInt and @MCSSWildlife. And donate here

What has WVI done to date?

The Hiray 100kv portable xray unit with Agfa cr15-x and laptop was installed in to the Rehabilitation Centre thanks to WVI, PLH Medical, Agfa Healthcare, Australian Embassy and some of MCSS’s supporters. And of course the Banyan Tree Resort and MCSS for making it happen. General Anaesthetic Services helped with the anaesthetic machine, Henry Schein Animal Health, Veterinary Instrumentation and Meadows Animal Healthcare have helped with other surgical equipment and consumables.

PLH Medical sent a member of their support team to the Seychelles to install the equipment and train MCSS staff, 3 Seychellois Government vets as well as private vets. WVI’s Johanna Storm repeated and extended the training when she visited in November 2015. Both have been on hand to answer queries from afar. WVI is slowly building up the capacity of the clinic, both in terms of expertise and equipment.  Now we have a new list of medication and equipment that are absent from the Seychelles that would be essential should there be another ‘Eden’. WVI is committed to increasing the wildlife medicine capacity in the Seychelles but this a slow and costly experience. Getting an x-ray and anaesthesia machine in to the clinic at the Rescue and Rehabilitation Centre is a huge step forward.