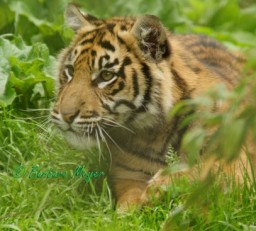 This is one of the most exciting veterinary developments in tiger conservation in recent years. It is the first comprehensive programme of its’ type in any tiger range state

Species under severe threat from other factors may become especially vulnerable to the negative impact of disease (Heard et al, 2013). In the case of the tiger, poaching, tiger-human conflict and habitat loss or degradation are currently recognised as the biggest threats to wild populations, but infectious disease may already be emerging as a significant risk (Seimon et al 2013).

In the Russian Far East, morbillivirus (Canine Distemper Virus or CDV) has been confirmed as causing deaths in wild tigers (Quigley et al 2010; Seimon et al 2013) and serological evidence suggests that a significant proportion of apparently normal tigers in that region have been exposed to the virus (Goodrich et al, 2012). Though unconfirmed, there are disturbing recent clinical reports suggesting that some wild Sumatran tigers may also be affected by CDV (Suyanti & Lewis – pers comm). This wouldn’t be surprising given that CDV infection is considered by local veterinarians to be common in the large domestic dog population on Sumatra, vaccination of domestic dogs against CDV is rare, wild Sumatran tigers are known to occasionally predate on domestic dogs, and the potential for contact between tigers and dogs has been considerably increased in recent years through the use of sport hunting dogs in tiger habitat. Although CDV is likely to be the virus posing the greatest risk to wild Sumatran tigers, there are many other disease agents of potential concern. However, no systematic disease surveys of wild tigers have yet been conducted in Indonesia.

Given that the maximum value of any disease surveillance for Sumatran tigers can only be realised if conducted in the long term – carried out for as long as there are tigers living free on Sumatra – the first principle established was that any disease surveillance programme will necessarily be an Indonesian initiative, albeit supported by specialist advisors from foreign NGO’s such as WVI and WCS.

A new organisation entitled the Sumatran Tiger Health Forum (STHF) was formed to initiate and coordinate disease surveillance activities for tigers across the whole of Sumatra, and advise on disease mitigation strategies should they become necessary. One critical objective of the STHF is to gather sufficient data to discriminate between endemic and newly emerging diseases in the tiger population. (NB It is anticipated that biological samples will only be taken from live wild tigers opportunistically during conflict mitigation, research and other activities). Dr Retno of Taman Safari was elected as coordinator of the STHF, and a simple committee structure developed to provide the coordinator with appropriate support. The drafting of a disease surveillance plan for Sumatra, including practical details to assist collaborators in all aspects of sampling and testing, is now well underway. This will be considered a living document subject to regular  updating in the light of experience. It is the aim of the STHF to publish a summary of surveillance data annually.

This is one of the most exciting veterinary developments in tiger conservation in recent years. It is the first comprehensive programme of its’ type in any tiger range state, and may lead the way to evidence-based disease prevention or mitigation strategies for wild Sumatran tigers. If successful, this initiative could develop into a model that could be exported to other tiger range states, and as such could accelerate progress towards the goal of establishing a global disease surveillance programme across all tiger habitats.

Reflecting on our Work in 2021

Our Chair of Trustees, Dr Miranda Stevenson, looks back on our recent activities.