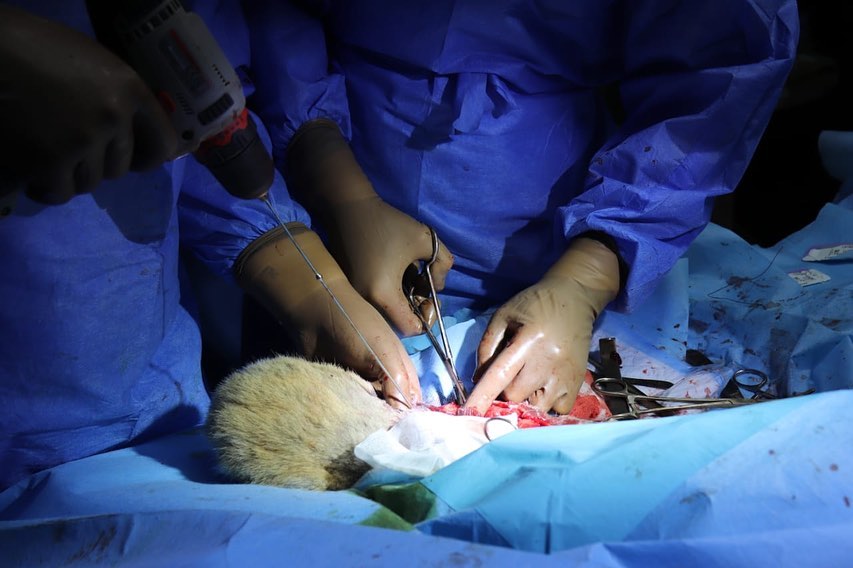 In December 2020, not long before Christmas, we heard from our Russian partner, wildlife vet Mikhail Goncharuk, about a tiger cub that had been found badly injured in the north of the Primorski Region and taken to the TRNCO Tiger Centre rehabilitation facility, not far from Vladivostok.

As well as soft tissue injuries, the cub had complex fractures of the shoulder, elbow and two paws. It’s believed these were sustained during an encounter with another adult predator, perhaps another tiger.

His condition was very serious, with a chest injury affecting his breathing and making anaesthesia particularly challenging. While Dr Goncharuk and the Tiger Centre team took charge of administering and monitoring the anaesthetic, two specialist human traumatology surgeons from Vladivostok’s Clinical Hospital No.2, Dr Nikita Vereshyak and Dr Andrei Prodin, were drafted in to perform the orthopaedic work.

In an initial four and a half hour procedure the surgeons reconstructed the cub’s right fore limb. With fractures of the humerus, ulna and radius, this was a major undertaking. A titanium plate was used to mend the humerus, and was positioned so as not to interfere with the bone’s growth plate, meaning it will not need to be replaced. Temporary fixtures were used to stabilise the smaller ulna and radius, to allow the bones to regenerate in as close to a normal position as possible. These temporary fixtures were later removed when it was clear from post-operative X-rays that the regeneration was proceeding well.

Commenting on Russian television, Dr Vereshyak later explained that, while there was really no difference between the nature of human and tiger bones and how they fracture, they had had to do some reading up on tiger anatomy before the operation!

All in all, this was an amazing team effort and the cub has gone on to make a remarkable recovery. Thanks to the metal plates and screws that were used to mend his fractures, and the speed with which he has healed, the rescue team named him ‘Wolverine’. It’s thought to be the first time that a wild predator of this sort has successfully had limb function restored in this way. There is now every chance that Wolverine – who has since moved to a large outdoor enclosure, with minimal human contact – will be able to be released back into the wild in the future.

We have followed the story of Wolverine’s ground-breaking surgery particularly closely, as Dr Goncharuk was mentored for many years by WVI founder and big cat expert, the late Dr John Lewis. Together they played an important role in building wildlife medicine capacity in Russia. John’s sudden death in November is such a profound loss to the conservation community, and we know how keenly Dr Goncharuk missed being able to turn to him for advice when confronted by this challenging case. As a result, we are especially delighted that the complex surgery went so well, and that John’s legacy continues to live on through Misha and his colleagues. WVI is funding new research by Misha, which will inform other projects of John's - and so their collaboration continues.