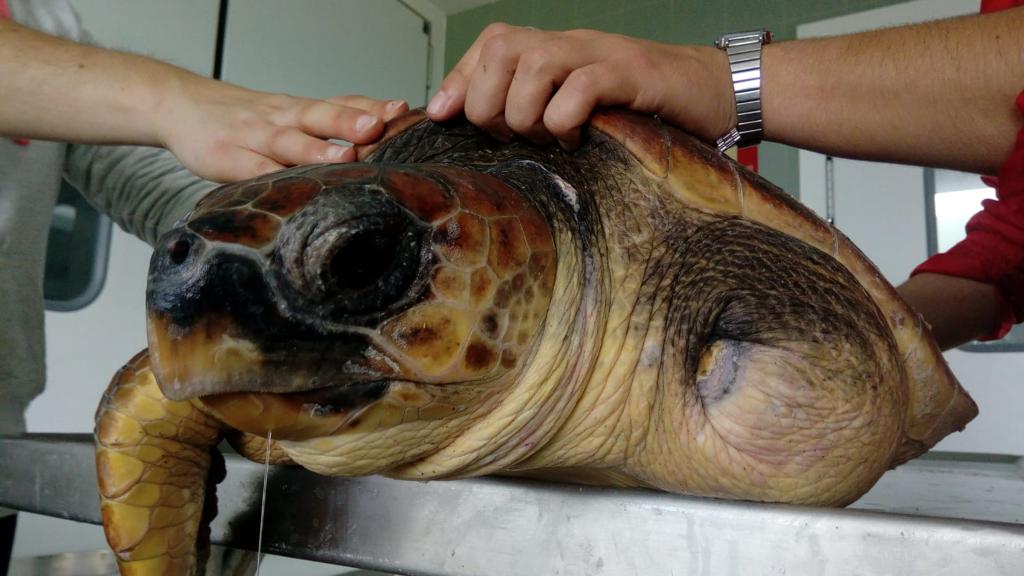 In October we reported on a loggerhead turtle that was admitted to CRAM in a really bad way. The prognosis was terrible as oneflipper had been amputated by a fishing net and the bone was still sticking out (see below).

UPDATE: Leftie was released with four others on Saturday 2nd February. She had some help over the waves as she was initially nervious. You can see the video of her release below followed by her story. Her recovery is thanks to the wonderful turtle vet Tania and the remarkable team at CRAM.

Leftie had obviously been entangled in a drift net for sometime and had deep lacerations around her neck (photo above) and abrasions around her right eye, flipper and neck (see below). The staff at CRAM immediately proceeded to do X-rays of the affected limbs plus X-rays to determine if it also suffered from decompression sickness, which she would have if she had been dragged up by a deep sea trawler. Blood was collected to ascertain her health status and given the results it was started on antibiotics and NSAID’s (anti-inflammatory).

For the first 24 hours the staff were unsure if Leftie was strong enough to swim. They were worried she might drown if they left her in water so they put her on a wet mattress until she regained her strength. Then she was doused with fresh water for 24 hours to get rid of any parasites. Once the staff were sure she was strong enough to get her head above water to breathe, she was placed in a shallow tank.

Against all odds the turtle survived, and a delighted Tania (see the last picture) visited this turtle to check up on the recovery process.

An ophthalmologist was in towards the end of Leftie's recovery looking at two other females with missing eyes and they had a look at the three flippered turtle as well. The great news is that Leftie can see out of her damaged eye and her bloods have a much healthier/normal results. She has started feeding on herring and sardines,though was still not too keen on squid (her diet in the wild).

The CRAM team are waiting for the OK from the government before she can be released. Hopefully before Christmas.

While Leftie won’t be released with a tracking device(unless someone donates €3,000) CRAM have previous experience with releasing a three flippered turtle. A loggerhead turtle had to have its fore right flipper amputated and the animal remained in captivity for 10 years due to fear of its' survival should it be released.

In 2016 an enrichment programme was developed to encourage wild-type feeding and movement with a view to releasing it.

On completion of the programme it was thought the animal had as good a chance of survival as fully flippered turtles and it was released with a transmitting GPS device. Results showed the turtle cross the strong currents of the Strait of Gibraltar within 4 months post-release. It then headed to the Azores before crossing the Atlantic Ocean. Ten months post release, at the time of writing, the turtle was still transmitting signals.

The conclusion is that in even the most trying of cases, it is possible to get turtles in to a state where they can be released with a good level of survival with good husbandry and veterinary planning and care.

We hope that Leftie has similar success.

Two one-eyed females were given a full examination by a veterinary ophthalmologist who confirmed that they can see sufficiently from one eye. These turtles will be put on an enrichment programme to get them ready for release. However, they have been in captivity for ten years so they may be too well adapted to captivity. We shall report back when they have been in training for a reasonable period.

Turtles like Leftie and the others at CRAM in Barcelona would not be getting specialist veterinary care without help from WVI's supporters. If you would like to support this project please click here.