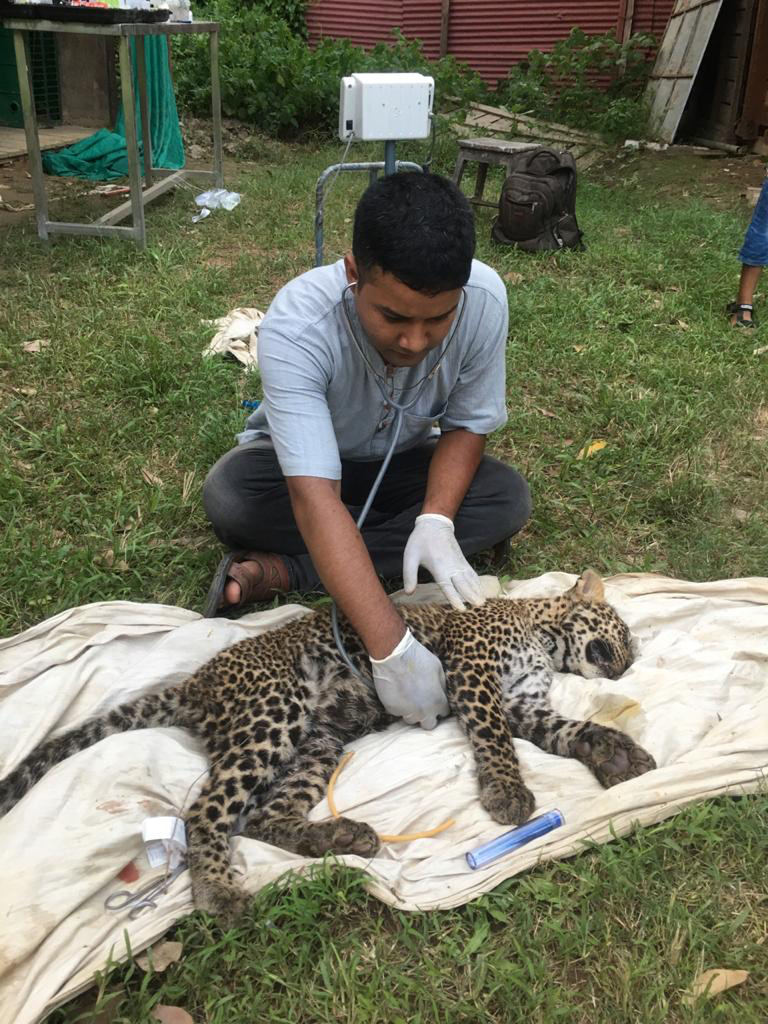 Dr Amir Sadaula is a wildlife vet at the National Trust forNature Conservation in Sauraha, Nepal. He leads a small but dedicated team, who look after the animals in and around Chitwan National Park (CNP). This is no small task. The park is almost 1000 km3 and is home to a wide variety of animals including tigers, leopards, sloth bears and elephants. However, the species the park is most famous for is the one-horned rhinoceros. 90% of the rhinos in Nepal live here.

In 2019, with the support of CNP, NTNC opened Nepal’s first wildlife hospital, which is also based in Sauraha. NTNC continue to manage this facility, so overseeing this is now also part of Amir’s job too.

All in all, it’s a busy and unpredictable schedule. I caught up with Amir to find out more about the work he does, how he has been impacted by the pandemic and what his hopes are for the future.

It’s great to see you again Amir. I realise that although we’ve known each other for a while now I’ve never asked you about how you got into being a wildlife vet.

I always knew I wanted to work with wildlife, that was where my passion was, and still is today.

After graduating from vet school, I managed to get a job working for Bird Conservation Nepal, working to support conservation efforts with the vultures. By that stage we understood the cause of the vulture decline but understanding the problem and solving it are two very different things.

Back in the 1980’s, when I was growing up, there were 1.6million vultures in Nepal. They were everywhere. These days we have around 20,000.That’s more than a 98% reduction in numbers, so there’s clearly a long way togo before the population recovers.

My job was to work with sick or injured vultures and support the breeding centre. I was also responsible for sampling dead livestock to check for the presence of diclofenac (the drug responsible for the decline). There were alternative, vulture-safe, drugs available, but these were often more expensive and it can be hard to get people to change their habits.

After two years with BCN I got a position as a junior vet withNTNC and have been based at the Biodiversity and Conservation Centre in Sauraha since 2014.

Wow – so that’s five years now you’ve been based at one of the world’s most famous National Parks. You must have seen a lot in that time! Is there such a thing as an average day?

Every day is different. You can make a plan to do one thing or another and then you get a call that there’s an injured rhino or a wild elephant in need, and you have to abandon what you planned on doing and go and deal with that. Wild animals don’t like to make appointments and more often than not you have to travel to them; sometimes just getting there can take a whole day. It’s not unusual for a rescue to take several days.

But, when we aren’t called out to a rescue we like to try to build up a routine. The park has a number of working elephants, which are needed to get to areas inaccessible by road. If there are any problems with them these are dealt with first thing in the morning so they can go out to graze afterwards. Then we’ll deal with any inpatients or lab work and of course there’s always a stack of paperwork to get through.

You mentioned wildlife rescues, are these injured animals or are you responding to conflict?

Sometimes we see injured animals, particularly rhinos. They can get injured fighting with each other for territory, but often it’s conflict, or animals being somewhere they shouldn’t be. In an average year we would expect to rescue five or six rhino, three or four tigers and as many as twelve leopards. We also have to respond to problem elephants, but in those cases we don’t capture them; we just collar them and use the park elephants to drive them away from villages.

It sounds like a lot to juggle and a lot of travelling. So, how was your work impacted by the pandemic?

Our work didn’t change a lot, but things were more stressful.

Despite the country being in lockdown, we still had to travel to attend rescues. There are 77 districts in Nepal and during lockdown we must have visited over 30 of them, so we really were moving around more than anyone else.

Of course, restaurants and hotels were closed so we had to take our own food and camp, or sleep in the vehicles. On top of this, the team were concerned about picking up the virus and taking it home, especially at the start before we had been vaccinated. It’s common in Nepal for several generations to live together in one house. I live with my daughter, my parents and my grandmother, so I was really concerned about what I might be exposing them to. Often if we had been away for a rescue I would choose to sleep at the hospital for a few nights when we got back, rather than return home, which meant I saw less of my family. I was lucky, and didn’t catch it, but three of our wildlife techs did and were unwell. Thankfully they all recovered.

The other big challenge was the economic impact the pandemic had on NTNC, and the country as a whole. In normal times a large proportion of the organisation’s funding comes from tourism. But during the pandemic very few tourists visited, and this has had a big impact on us financially. There was a lot of uncertainty and there were times when we were worried we might lose our jobs. But things have started to improve now. The tourists have started to comeback and people are feeling a bit more secure.

I’m pleased to hear that. So, what’s the biggest challenge you face now?

The Wildlife Hospital opened last year and we are really excited about our new facilities, but the biggest challenge we face now is access to training.

Last year we received a large grant to equip the hospital. That equipment has now arrived but in most cases we don’t have much training on how to use it. It’s hard to get experience like that in Nepal because things like x-ray machines aren’t very common in vet clinics and aren’t even used that much at the vet schools. So, we are a bit reliant on foreign support. But even then, it can be hard to learn as we don’t have a big caseload. For example, someone might come here for a week and try to teach us how to use the x-ray machine, but we may only have one or two animals to x-ray while they are here.

That’s why I’m really excited about working with WVI and the prospect of spending some time in the UK so I can have the chance to really develop some of those diagnostic skills and pass them on to my team. It’s just not something I have access to here.