One Year on from the Australian Bush Fires ... 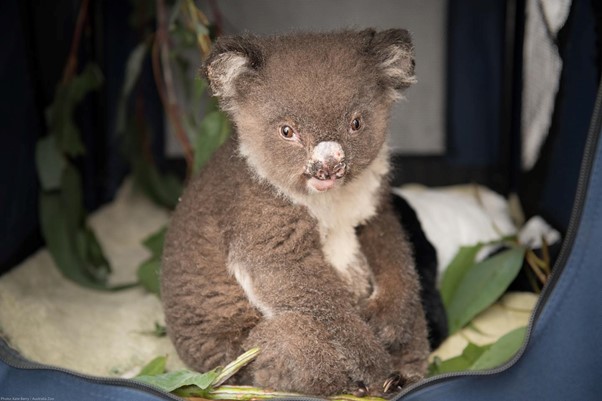 This is the first of our guest blogs from wildlife vets around the world. Jaimee works at Australia Zoo Wildlife Hospital and when the fires started in early 2020 we reached out to Jaimee to see if we could help. Fortunately many people around the world donated and this enabled as much wildlife as possible to get the emergency care they needed. Long term support can be difficult to come by and WVI is here if needed.

Over the last few years, unprecedented wildfires have raged across the globe, and we are currently seeing Greece, Spain and the USA ravaged by out-of-control fires. Scientists have documented an eight-fold increase in wildfire severity in the USA alone since 1985. In 2020, the largest tropical wetland on the planet, the Pantanal, was hit by the worst wildfires it has seen in decades, with 30% of this unique habitat destroyed. Wildlife has been severely impacted by these fires, with few wildlife veterinarians trained to handle such disasters. This is why Wildlife Vets International (WVI) is such an import organisation, partnering with vets around the world to equip them with the skills needed to assist wildlife.

More than a year has passed since the 2020 bushfires blazed across Australia and over 46 million acres were reduced to ash. Over 61,000 koalas and almost 143 million other native mammals were likely in the path of the fires, with many killed and others displaced from their homes. These were the worst fires on record our country has experienced. Although our local area of Queensland was not as severely affected as other parts of the country, our amazing team of vets and nurses at the Australia Zoo Wildlife Hospital (AZWH) were available to assist with the bushfire response, taking on over 200 displaced flying foxes that were left without habitat, and sending teams to Kangaroo Island to treat burnt wildlife.

The AZWH began as a humble clinic for wildlife, established by Steve and Terri Irwin, in memory of Steve’s mother, Lyn. In 2008 a brand new, purpose-built hospital facility was opened, and since that time over 100,000 wildlife patients have been admitted for assessment and treatment. We have seen an increasing number of injured wildlife every year, but 2020 and 2021 have been the worst yet. In the lead up to the fires the east of the country was suffering from a severe drought that had been ongoing for two years, leaving many regions devoid of suitable habitat for wildlife. Even before the bushfires started we saw an increase in animals admitted to the hospital, many encountering hazards as they travelled to find food and water. We had the highest intake of platypus into the hospital that we have ever seen, as they left their homes in search of water. The bush was so dry, it was kindling ready to burn - all it needed was a spark.

The AZWH is dedicated to the care of all species, but especially the threatened species that call Australia home. Flying foxes are incredibly important for the ecosystem, as they pollinate and disperse seeds of native plants, allowing forests to grow and regenerate. The grey headed flying fox (Pteropus poliocephalus) is vulnerable to extinction, and so being able to treat and rehabilitate these animals is vitally important for the population. As the fires tore through the bush, many adult flying foxes were lucky enough to escape, but sadly had to abandon their young, leaving hundreds of orphans in the path of the fire.

When we heard of the disaster unfolding for the flying foxes, AZWH and several dedicated flying fox rescue groups jumped into action. There was an incredible coordinated effort among the rescue groups who risked their own lives to rescue the pups and transport them to AZWH for treatment. When the flying foxes arrived, it was all hands on deck to triage and treat them. We had to construct emergency housing for the bats, as we had never before cared for so many at once. We were also lucky to have the assistance of many trained wildlife carers to take on pups and provide feeding and 24/7 care. Many of the pups were severely compromised, and we were concerned they would die. Thankfully, most actually made it to release and it was so incredibly rewarding to see them return to the wild. Without the training and expertise of wildlife vets, nurses, carers and rescuers, these flying foxes would never have survived.

Across the other side of the country, Kangaroo Island off the coast of South Australia was absolutely devastated by the fires, with almost half of the island scorched. Many animals, especially koalas, suffered burns, and an emergency veterinary response was activated to deal with the huge number of animals needing care. AZWH sent a vet and nurse team, as well as experienced koala keepers, to assist. Along with other veterinary professionals from around the country, this team was able to help treat many burnt wildlife.

Although we were working hard to save wildlife, the extent of the fires raging across the country left us feeling so helpless. Footage emerged of a koala running through ash and flames in an attempt to flee the fire, which was luckily found by a woman who took the shirt off her own back to rescue him. This poor singed koala, later named Lewis, succumbed to his injuries but became a mascot for many of the animals around the country who were saved from the fires, as well as those who weren’t so lucky.

The air was not fit to breathe

The air was not fit to breathe, with air quality dropping to hazardous levels in some areas. Smoke from the Australian fires travelled as far as Argentina. People all around the country lost their homes, and 34 tragically lost their lives. Many pets and livestock were also among the casualties. Firefighters, many of whom were volunteers, worked tirelessly to save lives and homes, with some even becoming trapped in their vehicles as flames passed over them. The whole country felt afraid and defenceless.  My own family members lost their home, luckily escaping with their lives, but I was powerless and unable to help. Everyone you spoke to knew someone who was affected.

Even after this length of time, I still become emotional thinking and writing about the black summer. It will forever impact me, as I’m sure it will for anyone living in Australia at the time. Over a year on, and travelling through areas of burnt bushland, you can see many of the trees regenerating, and there is a sense of hope for the future. Living through such an event makes you think about how vulnerable we are, as are all native wildlife species, and how fragile our ecosystem is. We cannot be complacent and more resources for wildlife care are needed in preparation for the next catastrophic event.

Going forward, AZWH is involved with collaborative research investigating best treatment options and prognostic indicators for fire affected wildlife. The aim of this research is to improve welfare outcomes for individual animals and increase the success of treatment and rehabilitation of wildlife.

Events such as these bushfires highlight the importance of wildlife vets, and the need for trained vets is increasing as natural disasters become more common. Bushfire intensity is not only increasing here in Australia, but all over the world. The support WVI provides for wildlife vets is invaluable and their network of veterinarians across the globe continues to grow thanks to the donations from those who care about wild animals and saving endangered species.

Support WVI by donating now, sign up to our weekly lottery, buying something from our shop and signing up to our newsletter.