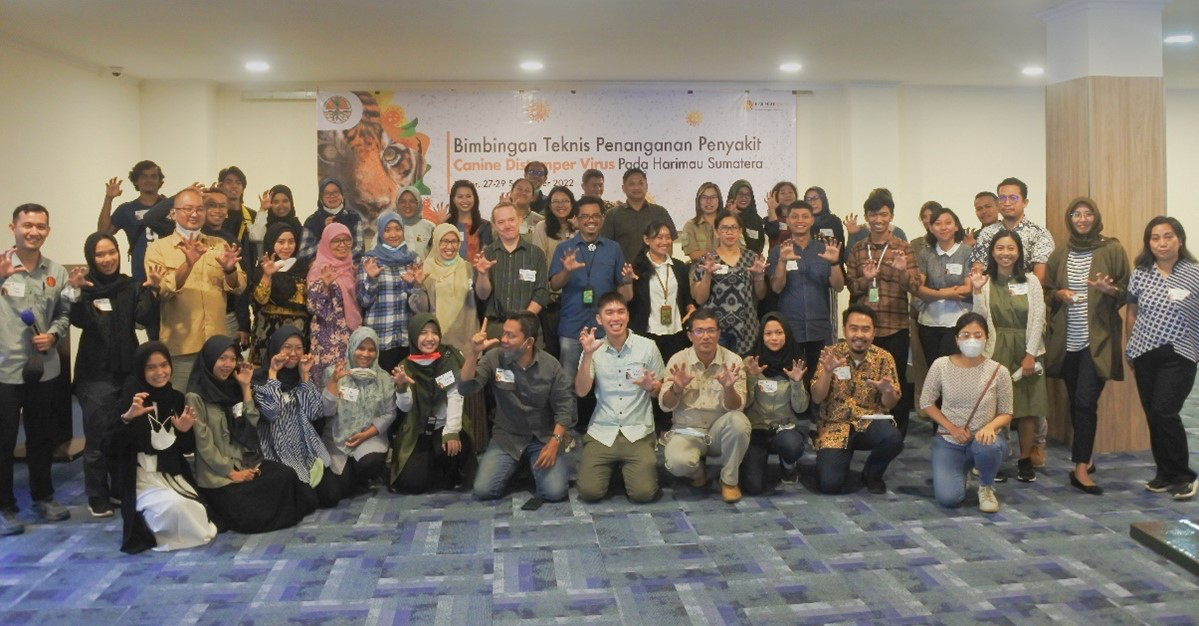 Above: The workshop gets off to a 'roaring' start.

Ground-breaking work in Indonesia is boosting the country’s efforts to save the critically endangered Sumatran tiger, bringing hope for the survival of this exceptionally shy and enigmatic sub-species.

In September, the government of Indonesia* and its partner, Forum HarimauKita (The Sumatran Tiger Conservation Forum), co-hosted a three-day workshop in Bogor, dedicated to addressing the threat of canine distemper virus (CDV) in tigers.

This seminal event was attended by a wide range of stakeholders, including local wildlife vets, rescue centre staff, representatives from conservation NGOs, academics, and local and national government officials. In total, over 30 organisations were represented. Together, they were able to take the first steps towards establishing the world’s first national surveillance programme for CDV in tigers.

The event was launched by the Director of Species and Genetic Biodiversity Conservation, Mrs. Indra Exploitasia, who welcomed participants and urged them to work together to develop a cohesive plan. Other notable speakers included Dr. Huda Darusman and Dr. Silmi Mariya from Bogor’s Agricultural University, Dr. Yohanna Kusumaningtyas of Taman Safari and  Erni Suyanti, chairperson of Forum HarimauKita.

Thanks to WVI, big cat experts, Dr Jess Bodgener and Dr Martin Gilbert were also in attendance. They were able to lend their expertise and help with designing and facilitating the workshop, alongside presenting their own research into CDV.

The workshop culminated in the collaborative drafting of Standing Operating Procedures for CDV surveillance. These are now with the government for finalisation and approval before hopefully being rolled out across the country, which would make Indonesia the first country in the world to introduce a coordinated nationwide CDV surveillance programme for wild tigers. This would have real potential to inspire other nations to follow suit and use the Indonesian model as a basis to create their own surveillance initiatives.

Cornell University veterinarian Dr Gilbert has been at the forefront of research into CDV since undertaking his PhD to assess the impact of the virus on Amur tigers in the Russian Far East, and has been working to assess the threat that CDV poses to tigers throughout their range. In Russia, the presence of CDV was found to increase the likelihood of extinction in small populations by as much as 65%, dramatically increasing the chance these animals could be lost from the landscape. With most wild tigers now found in small and isolated populations it is now crucially important to understand the epidemiology of the virus in order to mitigate such extinctions. Isolated populations are particularly vulnerable, as they don’t have animals migrating in from the surroundings to replace those that are lost, and this makes recoveries much harder and longer. This is particularly relevant for Sumatra as many of the remaining tigers are found in small pockets of isolated forest, spread far and wide across the island.

But testing for CDV is not a simple matter. The infection moves through the body in different stages, meaning that results can vary depending on what you test, how you test it and when you collect your samples.

During the workshop, Dr Bodgener and Dr Gilbert delivered some of the key components of the training, which was all designed to help standardise the approach to sampling (collection, storage, labelling, record-keeping and transportation) and testing, and were on hand to answer questions and provide guidance. Their participation followed on from an earlier collaboration, in which they established laboratory testing to detect the antibody immune response to CDV infection (using serum neutralisation techniques**) at Bogor Agricultural University in 2018. This test was then used to screen archived samples, providing the first indication that the wild Sumatran tiger population had been exposed to CDV (see here).

Indonesia was the first tiger range state to employ this technique for testing their tigers. Since then, it has also been established in Thailand and Nepal and Drs Bodgener and Gilbert are now assisting researchers in Malaysia to introduce serum neutralisation protocols there.

WVI founder and tiger advocate, Dr John Lewis, was a passionate supporter of research into CDV, and regularly campaigned to raise awareness and encourage those working with tigers to collect appropriate samples. Following his untimely death in 2020, his absence at this meeting was felt, with many of those present reminiscing over work he had done in Indonesia in the past. He was there in spirit though, and Dr Bodgener, who was previously mentored by Dr Lewis, was able to present Dr Dedi from the government Department of Species and Genetic Biodiversity Conservation with a print of artist Penny Wheatly’s stunning painting “John’s Tiger”, which she created in his honour.

Given this context, it was particularly rewarding for WVI to be able to support Drs Bodgener and Gilbert and make it possible for them to take part in the workshop in person. We were also able to facilitate the involvement of a significant number of other stakeholders, including rescue centre staff, members of the Javan Leopard Forum and researchers from Sumatra, who could not otherwise have participated, making it a much larger and more inclusive event.

In addition, we were also able to involve four researchers from Universiti Putra Malaysia (UPM), from nearby Kuala Lumpur. This move hopefully will help to foster future collaborations and maximise efforts throughout the region. There have already been several suspected cases of CDV in Malayan tigers, but so far testing has been limited. Dr Bodgener and Dr Gilbert were able to visit UPM on their way to Indonesia, meeting with representatives from a range of academic institutions. They were able to tour the lab that would be used for more extensive testing and are now assisting UPM virologist Dr Farina Mustaffa-Kamal and her team to set up serum neutralisation testing in the future. This would enable them to screen samples for antibodies so they can start to understand the prevalence of the virus in the wild. Their plan is to sample mesocarnivores, like civets, to help them identify which animals are acting as a reservoir. This epidemiological information is vital when it comes to identifying control strategies.

It was an added bonus that Allie Lewis was also able to accompany  Dr Bodgener and Dr Gilbert to Indonesia, to promote the work of the Wild TigerHealth Project (WTHP), founded by her late husband, Dr John Lewis. Since John’s death, Allie has taken on the running of the WTHP, with support from John’s son Killian Currey-Lewis and WVI veterinary advisor Dr Jane Hopper. John once described the project, which seeks to be a one-stop shop for the provision of reliable, open-access information to those working with wild tigers, as his greatest legacy, so it is particularly satisfying to see this effort continuing. Having the chance to meet with end users and get valuable feedback will also allow Allie to ensure the website continues to adapt and meet the needs of its subscribers.

The progress made through this workshop bodes well for the future of disease surveillance in wild tigers, both in Indonesia and beyond. And that in turn gives real hope for the survival of tigers everywhere.

We are extremely grateful to the following for making sure this project could happen:

**The most reliable technique to detect whether a tiger has been exposed to CDV is a serum neutralisation test, which uses cell culture to reproduce infection outside the body, but it takes time to set up and run, particularly if the lab being used is one where work with cell culture is not routine. Although there are commercially available bench top kits available to test for CDV antibodies in dogs, these don’t work in tigers.