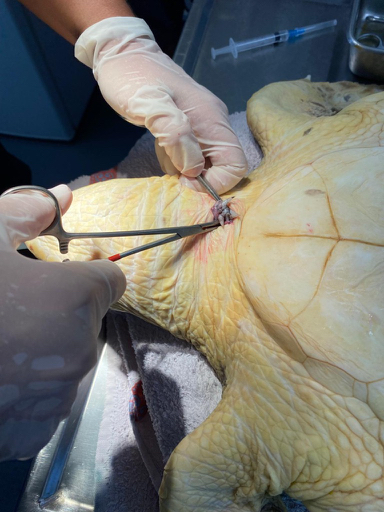 Last month, the Turtle Team of Matthew Rendle RVN and vet Tania Monreal finally got back out to visit our partners at the ARCHELON Sea Turtle Rescue Centre in Greece. Although time was short – with only two days on the ground – Matt and Tania were able to help with a number of challenging veterinary cases.

Among the turtles they saw was Valentine, a juvenile female loggerhead, who had arrived at the Rescue Centre weak and debilitated – with thick fishing line hanging out of her cloaca at her rear end.

Sadly, an X-ray then revealed a large and deadly fishing hook deeply embedded in her oesophagus.

The veterinary team, along with ARCHELON’s wildlife biologist and rehab officer, Eirini Kasimati, assessed Valentine on their arrival. Her condition was deteriorating, with a blood sample indicating anaemia, and she was still unable to pass the fishing line. Tania was very worried about the real risk of rupture or ‘telescoping’ (intussusception) of the gastrointestinal tract, leading to major damage to the lining and the prospect of a painful death. The WVI veterinary team concluded that the only option was to anaesthetise her and try to remove the hook, despite the risks posed by her poor condition.

Valentine was given strong painkillers and a combination of anaesthetic drugs. Once fully asleep and ventilated, an incision was made at the top of her thorax. Locating the hook took some time, but once found it was possible for Tania to firmly grip it with artery forceps and gently ease it out of the oesophagus.

However, there was no way to remove the thick fishing line, which was still tied to the hook. The line was cut, in the hope that now it was detached from the hook Valentine might be able to pass it over the coming days.

The three layers of the incision in her thorax were carefully closed, and she was closely monitored during her recovery. She spent the next night receiving fluids in dry, quiet surroundings, before being returned to her enclosure the next day.

She was much brighter following the hook removal and to the absolute delight of both the WVI and ARCHELON teams, she successfully passed the fishing line three days later – all 70cm of it!

And this week she was well enough to be released back into the Mediterranean, where she has every chance of going on to breed successfully and help ensure the survival of her remarkable species. We wish you a long and happy life, Valentine!

The Turtle Team’s trip to Archelon would not have been possible without the generous support of Animal Friends Pet Insurance. We are hugely grateful to Animal Friends for making sure turtles like Valentine get the best possible care, and a second chance of a life in the ocean.